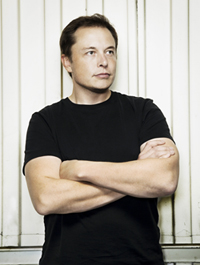 Elon Musk is the CEO and Product Architect of Tesla Motors and the CEO/CTO of Space Exploration
Technologies (SpaceX).

At SpaceX, Elon is the chief designer, overseeing development of rockets and spacecraft for missions to Earth orbit and ultimately to other planets. In 2008, SpaceX's Falcon 9 rocket and Dragon spacecraft won the NASA contract to provide a commercial replacement for the cargo transport function of the Space Shuttle, which retired in 2011. The SpaceX Falcon 1 was the first privately developed liquid fuel rocket to reach orbit. In 2010, SpaceX became the first commercial company to successfully recover a spacecraft from Earth orbit with its Dragon spacecraft. In 2012, SpaceX became the first commercial company to dock with the International Space Station and return cargo to Earth with the Dragon. Since then Dragon has twice delivered cargo to and from the space station, in the first of many cargo resupply missions for NASA. In December 2013, SpaceX completed its first geostationary transfer mission, delivering the SES-8 satellite to Earth's orbit. In January 2014, SpaceX successfully launched the THAICOM 6 satellite for leading Asian satellite operator THAICOM.

At Tesla, Elon has overseen product development and design from the beginning, including the all electric Tesla Roadster, Model S and Model X. Transitioning to a sustainable energy economy, in which electric vehicles play a pivotal role, has been one of his central interests for almost two decades, stemming from his time as a physics student working on ultracapacitors in Silicon Valley. In December 2013, the National Highway Traffic Safety Administration (NHTSA) reaffirmed the 5-star safety rating of the Tesla Model S overall and in all subcategories for Model Year 2014, confirming the highest safety rating in America.

In addition, Elon is the non-executive chairman and principal shareholder of SolarCity, which he helped create. SolarCity is now the leading provider of solar power systems in the United States.

Prior to SpaceX, Elon co-founded PayPal, the world's leading Internet payment system, and served as the company's Chairman and CEO. Before PayPal, Mr. Musk co-founded Zip2, a provider of Internet software to the media industry.