Since becoming CEO in January 2012, Ginni has led IBM through the most significant transformation in its history, reinventing the company to lead in the new era of AI, blockchain, cybersecurity and quantum technologies, all delivered on IBM’s enterprise-strength cloud platform. Today, IBM is the world leader in AI and cloud computing for business, underpinned with trust and security.

"The only way you survive is you continuously transform into something else. It's this idea of continuous transformation that makes you an innovation company."

Throughout IBM’s reinvention, Ginni has worked to ensure that new technologies are developed and deployed in a way that is ethical and enduring. IBM was the first, for example, to publish long-held principles of trust for AI, data responsibility and data transparency.

IBM’s commitment to diversity and inclusion also has advanced under Ginni’s leadership. This includes extending parental leave and making it easier for women to return to the workforce through a “returnships” program with hands-on work experience in emerging technologies. This pioneering work was recognized in 2018 by the prestigious Catalyst Award for advancing diversity and women’s initiatives. IBM is the only tech company to have earned this recognition in the past 20 years and the only company ever to be honored four times.

IBM under Ginni’s leadership also has led the way on ensuring that society is prepared for this new era of data. This includes equipping workers for “new collar” job roles in emerging technology fields that do not always require a bachelor’s degree. The IBM-created Pathways in Technology (P-TECH) education model is a six-year program that prepares students for career success by combining high school with a community college degree, mentoring and internships — all within existing local education budgets. Today, there are more than 120 schools worldwide, bringing technology employment opportunities to more than 100,000 students.

"Today when I think about diversity, I actually think about the word 'inclusion.' And I think this is a time of great inclusion. It's not men, it's not women alone. Whether it's geographic, it's approach, it's your style, it's your way of learning, the way you want to contribute, it's your age - it is really broad."

Beginning her career with IBM in 1981, Ginni held a series of leadership positions across the company and led the successful integration of PricewaterhouseCoopers Consulting, creating a global team of more than 100,000 business consultants and services experts.

Ginni has a Bachelor of Science degree with high honors in computer science and electrical engineering from Northwestern University, where she later was awarded an honorary degree. She also has an honorary degree from Rensselaer Polytechnic Institute.

She serves on the Council on Foreign Relations, the board of trustees of Northwestern University and the boards of overseers and managers of Memorial Sloan-Kettering Cancer Center. She is co-chair of the Aspen Institute’s Cyber Group and is a member of the advisory board of Tsinghua University School of Economics and Management.

"Ask yourself when you learn the most. I guarantee it's when you felt at risk." 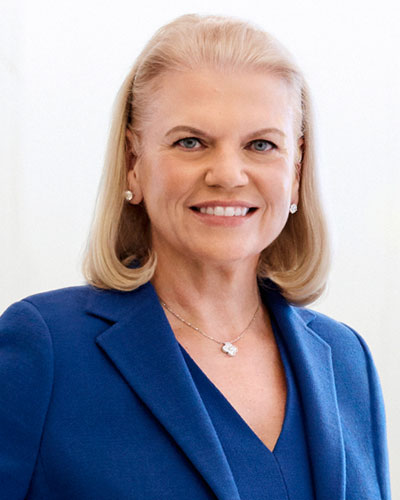