Jeffrey R. Immelt is the chairman of the board and chief executive officer of General Electric. He is the ninth chairman of GE, a post he has held since September 7, 2001. Mr. Immelt has held several global leadership positions since coming to GE in 1982, including roles in GE's Plastics, Appliances, and Healthcare businesses. In 1989 he became an officer of GE and joined the GE Capital Board in 1997. A couple years later, in 2000, Mr. Immelt was appointed president and chief executive officer.

Mr. Immelt has been named one of the "World's Best CEOs" three times by Barron's, and since he began serving as chief executive officer, GE has been named "America's Most Admired Company" in a poll conducted by Fortune magazine and one of "The World's Most Respected Companies" in polls by Barron's and the Financial Times.

Mr. Immelt was the chair of President Obama's Council on Jobs and Competitiveness. He is a member of The American Academy of Arts & Sciences.

Mr. Immelt earned a B.A. degree in applied mathematics from Dartmouth College in 1978 and an M.B.A. from Harvard University in 1982. He and his wife have one daughter.

“I am so pleased to have received this recognition on behalf of the GE employees around the world. We carry on the legacy of GE founder Thomas Edison in how we have transformed GE into a digital industrial company, truly making it the 124 year-old-start-up. We push boundaries every day and are delivering new technologies to make the world work better.”
- Jeffrey Immelt 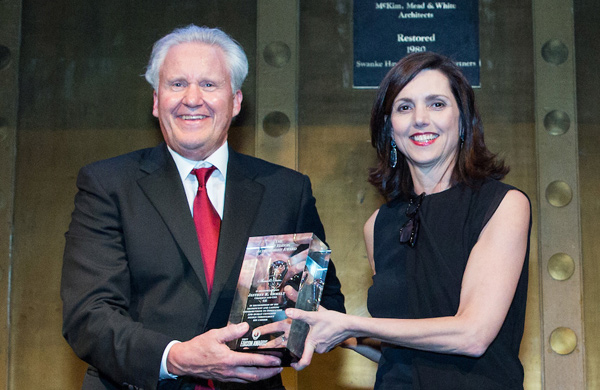 "It was a career highlight to be able to present the Edison Achievement Award to Jeff Immelt last night. He has led GE through remarkable transformation. So I got to salute him as a great business leader, and also a changemaker and a mentor.

In the past, when I’ve presented him with what seemed like a crazy idea. When I’ve miss-stepped. When things didn’t turn out as spectacularly as the brilliant business plans predicted, Jeff didn't ask, “What went wrong?” But instead: “What did you learn?” Always adding, “You know, we have to try things.”

“Just try.” Powerful words that give people (like me) and their ideas room to grow into their potential."

Jeffrey Immelt has received numerous accolades throughout his career including:

Jeff Immelt in the News

G.E., the 124-Year-Old Software Start-Up
New York Times | September 2016
It may not qualify as a lightning-bolt eureka moment, but Jeffrey R. Immelt, chief executive of General Electric, recalls the June day in 2009 that got him thinking. He was speaking with G.E. scientists about new jet engines they were building, laden with sensors to generate a trove of data from every flight — but to what end?

How GE Exorcised the Ghost of Jack Welch to Become a 124-Year-Old Startup
Bloomberg Businessweek | March 2016
A decade after taking over, Jeff Immelt’s long bet on the Internet of Really Big Things seems to be paying off.

The Competitor Amazon Never Saw Coming
The Hive | July 2016
G.E. is largely done with the media and finance businesses. Now, the 124-year-old company is looking to beat Silicon Valley at its own game. In conversation, C.E.O. Jeff Immelt discloses the sweet sauce.

LinkedIn Influencer Video w/Jeff Immelt focused on GE’s transformation
LinkedIn | August 2016
We may be a century-old company, but we need to move quickly, take risks, fail fast and behave like a startup to keep winning.

GE CEO JEFF IMMELT: Let's finally end the debate over whether we are in a tech bubble
Business Insider | December 2015
The industrial app economy is just getting started. Today it stands where the consumer app economy was ten years ago.

GE CEO: We are a good bet for investors right now
CNBC | December 2015
With GE's stock as the best performing large-cap industrial in the market, Immelt attributed its success to a combination of the disposition of GE Capital occurring in a fast and valuable way, the spinoff of its credit arm called Synchrony and the fast, organic growth of its industrial business. 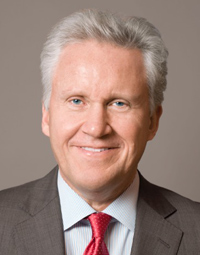