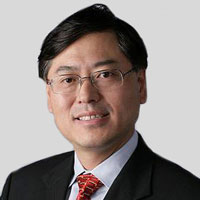 Yang Yuanqing is chairman and chief executive officer of Lenovo, the world's largest PC maker and an emerging PC Plus leader (PC+Tablet+Smartphone).

Yang Yuanqing is chairman and chief executive officer of Lenovo, the world's largest PC maker and an emerging PC Plus leader (PC+Tablet+Smartphone). Under his leadership, Lenovo has grown from China's best-selling PC manufacturer to become a global technology leader with sales of $34 billion in more than 160 countries and manufacturing on four continents. Lenovo has not only unleashed wave after wave of innovative products, but it has also helped redefine what it means to be a truly global company.

Born in Anhui Province, China, Mr. Yang received a bachelor's degree in computer science from Shanghai Jiao Tong University and a master's degree in computer science from the University of Science and Technology of China. Shortly after graduation in 1989, he joined Lenovo as a salesman five years after the company's founding. He rose rapidly through the company's ranks and, at the age of 30, was named head of the personal computer business in 1994, and became an executive director of Lenovo Group in1997. In 2001, Mr. Yang became the chief executive officer of Lenovo succeeding founder Liu Chuanzhi. Meanwhile, he was awarded the Medal of Youth in China in 1999, and was selected by BusinessWeek magazine as one of the "Stars of Asia" in 1999 and 2001.

In December 2004, Mr. Yang rocked the business world and catapulted Lenovo onto the global stage announcing his audacious plan to acquire IBM's Personal Computing Division. Lenovo's acquisition of IBM PC and its iconic ThinkPad brand is today chronicled as one of the most successful technology mergers ever and started Lenovo on a remarkable path of growth that saw its sales grow ten-fold to roughly $34 billion supported by approximately 46,000 employees located in 60+ countries worldwide including various joint ventures, and customers in more than 160 countries.

Mr. Yang stepped down as CEO in 2005, choosing to serve as chairman for four years. During this period, he committed to building Lenovo as a global brand signing on as a lead sponsor and technology provider for the 2006 Turin Winter Olympic Games and 2008 Beijing Olympic Games. In 2009, faced with recovering from the world financial crisis and turning around a now struggling Lenovo, Yang Yuanqing returned as CEO and Liu Chuanzhi as chairman. Addressing the crisis head on, Mr. Yang developed Lenovo's "Protect and Attack" strategy -- protecting the company's strengths in China and the commercial sector while simultaneously attacking new high-growth opportunities in emerging markets and worldwide consumer market.

Mr. Yang's successful execution of Protect and Attack led Lenovo to more than double revenue and worldwide market share and deliver record profits out-performing the industry for nearly five years running. Following the company's successful recovery, Liu Chuanzhi retired in 2011 and Yang Yuanqing became chairman and CEO. Lenovo has since returned to the Fortune Global 500, climbing to 329 on the list in 2013 and, in the same year, became the world's number 1 PC company.

What has made Lenovo's post-integration and global expansion work so effectively is that the company not only acknowledges but embraces cultural diversity as a source of strength as it establishes even deeper roots in each major market in which it operates, investing not only in sales and distribution, like a traditional multinational company, but also in local domestic manufacturing, R&D and other high-value functions. This global reach with local excellence makes Lenovo what Mr. Yang refers to as a "global-local" company, supported by strategically placing its most valuable business operations around the world. In the process, he has built a diverse leadership model that represents the company's global reach and global ambitions with a leadership team that is balanced and diverse, with the top 10 leaders representing 6 nationalities, while the top 100 executives have 17 different nationalities.

Today, Mr. Yang is spearheading the company's continued drive to diversify its business and build a strong foundation for its transformation into a PC Plus company with outstanding performance in PCs and mobile devices like tablets and smartphones and has led the new wave of innovation in multimode form factors, including the convertible PC/Tablet. In fact, Lenovo currently ranks #1 in PCs, #2 in PCs + Tablets and #3 in "Smart Connected Devices" (PC+Tablet+Smartphone). Lenovo's combined shipments of smartphones and tablets now surpass those of PC shipments. The company has also spearheaded the development of the mobile app marketplace and ecosystem that supports China's nearly 1 billion mobile internet users.

Mr. Yang has been named "Business Leader of the Year" by Fortune China (2007), "Businessman of the Year" by Forbes Asia (2008), "Best CEO in China" by Finance Asia (2011), CCTV "Annual Economic Figure" (2004 and 2012) and one of the "World's 30 best CEOs" by Barron's magazine (2013). He is also a member of the New York Stock Exchange's International Advisory Committee, the Brookings Institution International Advisory Council, The Wall Street Journal CEO Council as well as the National Youth Association Committee. He serves as director of China's Entrepreneurs' Association and is a guest professor at the University of Science and Technology of China, his alma mater.

More Information about Lenovo at: http://www.lenovo.com/