Apple founder Steve Jobs once said that “Innovation distinguishes between a leader and a follower.” As the economic market continues to grow, and market share continues to become the difference in a company sailing away, or barely staying afloat, many organizations look towards innovation to become an industry leader. But what is innovation, and what must a business do to become a leader of industry?

Innovation refers to changing or creating a more effective process, product, or idea that can increase the likelihood of success. For many, this could mean generating new ideas, or advancing current products and services. Innovation is a mechanism for success, and can help grow an organization’s share of the marketplace.

But what points of action lead to innovation? For that, we must consider the three “I’s” of innovation— specifically inquiry, invention, and implementation; all three must be in play before innovation can truly be mastered. 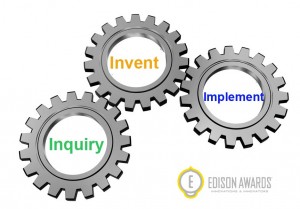 Transportation as far back as records show involved wheels. In the late 1880s, European designers were creating the blueprints for the first automobile. Turning those designs into functional transportation methods took time, and were not available for the masses. Henry Ford wanted to change that.  Ford reviewed current production methods and asked “How can these be improved?”

Ford’s quest to improve automobile production led to the idea of an assembly line. According to Ford, men and tools should be placed in a sequence of operation so that each component travels the shortest distance while in the process building a fully functioning automobile. Ford developed a concept known as gravity slides that would assist workers in doing so. This function would allow for increased product production with minimal delay.

On December 1, 1913, Ford introduced the assembly line at his Highland Park Plant and revolutionized the auto industry and automobile manufacturing across the globe. Workers were able to complete one specific task, and then move on to the next vehicle. Production time decreased from 12 hours to 93 minutes, and product production increased in large amounts as well. The assembly line was a hit and allowed Ford to enhance his profit margin while lowering the cost to consumers.

While many think innovation only comes when creating a new product, Ford proved that improving a current process could be as innovative. He inquired, invented, and implemented a new procedure used in manufacturing to this day. Ford was a forward thinker with a vision; that helped establish his place as an industry leader for decades to come.