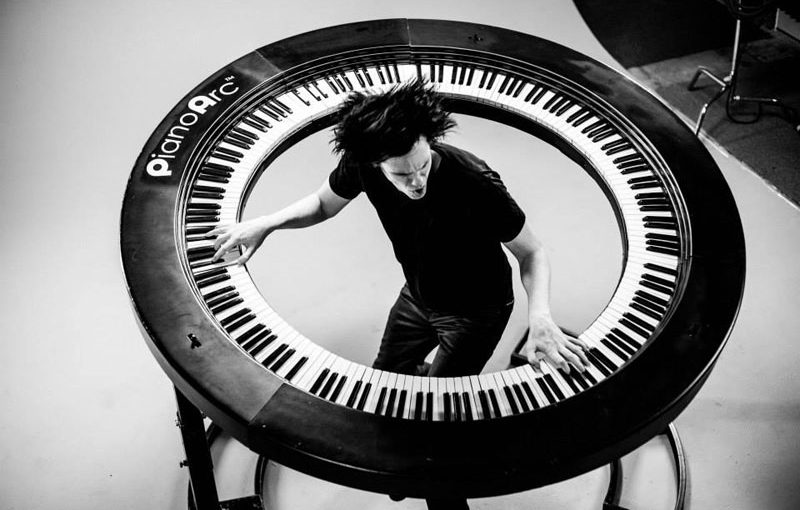 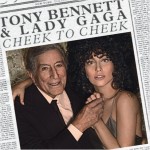 “Collective Transformation” was my first thought as I listened to NPR’s feature about the two singers’ unlikely alliance that generated their newly-released (and wonderful) Cheek-to-Cheek album.  You may recall that my last blog was about Collective Transformation—the innovative alchemy that occurs when two “unlikely partner” organizations collaborate in unforeseen ways to synergize potent innovations.  Or, as in the case of these two singing stars, an amazing, unexpected harmony of talents.

So, one week later, I was thrilled to learn that Lady Gaga’s keyboardist, Brockett Parsons, had submitted his PianoArc for a possible 2015 Edison Award.  The PianoArc is a one-of-a-kind 360° keyboard constructed of three keyboards with specialized synthesizing capabilities, resulting in endless sound possibilities.

The PianoArc has all the elements of a classic “Thomas Edison story,” complete with a dash of last-minute, nail-biting, Hollywood-style action.

The idea for this keyboard originally sparked to life in a conversation between Brockett and Lady Gaga’s former guitarist Kareem Devlin.  As Brockett tells it:

I was getting ready for the next tour and [Kareem and I] were talking about how to make our equipment better. I am into performance–not just playing, but the whole experience.  So I asked him, “How can I make my rig better?” And he said, “Hey man…just make a circle around you.” I mulled it over in my head for a few weeks, and then I called Chuck.

Chuck Johnson had the musical, business and management skills needed to bring this idea to life.  He and Brockett had first joined forces years before as students, playing in the Bucknell University’s Jazz & Rock Ensemble.  Brockett continued, “Chuck was the only guy I knew…who had the guts to try to do something like this, who had the creativity.  I trusted his insight about what’s possible, and what isn’t.”

“Wow, that’s a cool idea. I have no idea how you could do that,” was Chuck’s initial reaction. “Since the synthesizer era of the ’80’s and the ’70’s, not much has happened in the keyboard world. It became a business/technology/arts challenge to see if we could deliver on this thing for Brockett.”

Chuck, who describes himself as “a veteran of the piano/keyboard/technology/software world,” said that on this project, he “spent equal time holding the phone, the mouse, the drill, and the burrito bag.”

Chuck pulled together the PianoArc team, including expert piano builder Richard Fell, and Dave Starkey, inventor of the optical sensing technology used in the PianoArc.  The group worked almost around the clock to beat their deadline—Lady Gaga’s Born This Way Ball tour, which was just a couple months away.

Brockett cites Chuck’s exceptional project management skills as a primary reason for the successful outcome of this project:

Think about the level of management skill that is took for Chuck to get this done. I was going on tour in April of 2012, rehearsing in February of 2012, and I didn’t get to Chuck’s place until December of 2011 before he measured my arm length.  So, essentially, they built it in three months and delivered it—something that had never been done before—and had it ready for the tour.

One of the things that struck me the most in our conversation was the deep respect and admiration that Brockett and Chuck have, not only for each other, but also the PianoArc team, the stage crew who sets up the keyboard for every concert, and for Lady Gaga. That level of mutual appreciation permeated our entire conversation—just listening to them buoyed me up.

The Power of Pressure

While that extremely tight deadline was very difficult to meet, both guys felt that it also represented a positive force driving the work.  Chuck observed that:

…there’s that subtle truth in life that work fills the time allotted to it. What can happen is, when engineering or marketing or somebody takes over the process in a way that’s not driven by something that’s critical, you can end up in these pathways that will get you into a never-get-it done state.  It’s like “Oh, couldn’t we do this? or “Shouldn’t we really have that in place before we do this?”  All those reasonable, rational questions!

We were able to mute those by carefully prioritizing. You discipline your choices.  A little technique I’ve used…for managing these things is an A-B-C list.  A-list items are “If we don’t have this, we can’t ship it.”

He went on to say that B-items were good, but not absolutely mandatory—ideas to implement only if time and money allowed.  C-items were either too crazy to carry out, or should be put on the shelf as “maybes” for down the road.  Some of those early ideas that could not make the cut as an A-item were able to be included when they created the second PianoArc.  For example, the new version can fold in half for easier shipping.

Recalling the intensity of those days, Brockett said, “A lesser project manager would’ve said, ‘Listen man, it’s just not gonna work out this time.’”  Chuck laughed, “A smarter guy!”  Brockett replied that Chuck’s determination to not give up was the reason the PianoArc came into reality.

Commenting on the productive impetus of having to meet such a close deadline, Brockett cited Malcolm Gladwell, all of whose books Brockett has read. “We had to get it done by a certain time, so we just figured it out.  It’s like Malcolm Gladwell [says]—‘Too many choices hinder you.’”

Meeting their goal came down literally to the last minute, with Chuck buying coffee and sandwiches for the freight truck driver, repeatedly talking him into staying just a few more minutes, while the team inside finished the last crucial details.  With the paint still drying, the PianoArc departed on its journey to Brockett, who recalled

… because it was so much pressure to get it done in such a short amount of time, they were only able to test it once, before it was even put into the crate.  So, I was literally getting this thing, and nobody’s played it. I’m getting this thing in the heat of learning for a major world tour.  And nobody knows if it’s going to work. The first gig that it played was the Olympic Stadium in South Korea, in front of 40,000 people.

Chuck, who grew up half an hour from Thomas Edison’s Menlo Park lab in New Jersey, stated,  “Thomas Edison was one of my childhood heroes. I loved the idea of a guy who just figured out cool stuff.” Toward the end of the project, Chuck wrote the team a message of appreciation, capturing the enormity of their efforts, likening the experience to “Edison toiling in the lab.”  (See sidebar below.)

When I asked the guys if there was anything in their pasts that laid the seeds for this accomplishment, they both thought of parents.  Chuck recalled an experience with his father…

When I was 13…I really got fascinated with electronic music. This whole idea of synthesizers was pretty new at the time. With my dad being an electrical engineer, and working for Bell Labs—one of the great innovation centers of the planet, in the history of the planet, arguably—he got me this [synthesizer] kit for my 13th birthday and we put it together.

It never left me—that idea that it’s possible to build stuff from scratch and make it work. I used to take that thing on tour with the band that we were in… and you plugged it in, and it all worked! It was a thing that I’d put together, so I had that kind of belief that it is possible to make something yourself and make it work.

And I think Rich, the guy who did most of the physical work, and Dave, have similar views of things. Those are definitely “I can do it” guys.  You get a couple of guys like that in a room, you can make stuff happen. It’s a technical thing, but it’s also a world-of-possibility thing.

While Brockett recalled his mother…

My mom is a really gifted piano player and composer.  She would have concerts at the house ever since I was young, with her own group, every year. I don’t know anyone around my town who did that. So, I think that motivated me to explore different ideas about music in general.

And it was instilled in me that maybe doing the popular thing isn’t necessarily a good thing.  Sometimes you want to do something that no one else is doing, and it can be great. Now when I’m thinking about something outside of the box, I’m thinking that it’s a strength, and I let it go and really, really go for it.

This probably wouldn’t have been built without [Lady Gaga.] I wouldn’t have thought about it if I worked for someone else.  Her spirit of innovation is so great, that I wanted to raise my level, because her level’s so, so incredibly high.  In the general spirit of things, I think it comes from the top. She’s about the spirit of innovation; that’s why I did it, that’s why I went for it, and it fit the tour.” 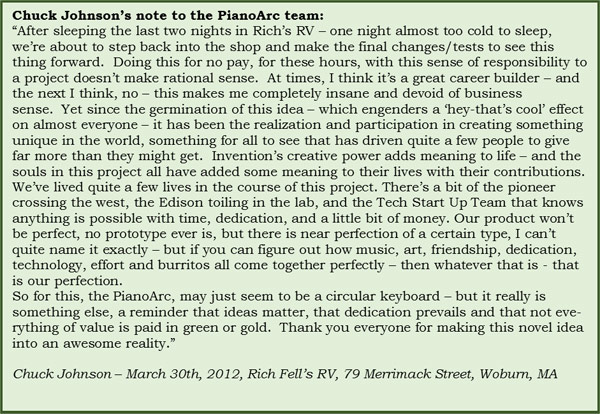