Thomas Edison, “the father of innovation” as many have called him, plays an important part in this and every holiday season. As we watch the glittering holiday displays, we can hark back to the awe that the country felt with Edison unveiled the first sparkling Christmas lamps in 1879. This invention came just weeks after he invented the first practical incandescent light and the world’s first electric circuit. Edison, the showman that he was, decided to demonstrate his new technology at his laboratory in Menlo Park, New Jersey. 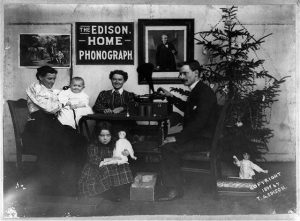 Edison, who had recently demonstrated his phonograph to US President Rutherford B. Hayes, sought to gain public interest for his lighting innovations. His plan was to light up the night with a public display of incandescent lamps that had been strung together and placed strategically around his laboratory.

With the ink barely dry on the October 1879 patent, Edison reached out to on of his many newspaper connections, in hopes of spreading the word about his light display. Still working out the kinks with large electrical generators which were going to power the demonstration, Edison planned to stage his event in early January 1880.

Edison met with a New York journalist, to boast about his project and to speculate on the visitor turnout. Edison made the journalist promise not to publish the story before the January date, but the journalist knew he had the scoop of a lifetime, and leaked word of Edison’s incandescent light display for a handsome fee, which forced Edison to change the date of his display and dramatically accelerate his schedule.

Edison and his team worked with vigor for the next two weeks to meet public demand. However, all of the preparation was not in vain as onlookers rolled in day after day to view Edison’s incandescent display.

A few years later a member of Edison’s marketing staff, Edward H. Johnson, added a twist to the light display by placing a string of 80 lights around a Christmas tree in his home. The tree caused many people to visit his home, as their attention was peaked by this new use of electricity.

Even with the massive display outside Menlo Park, or inside Johnson’s home, Christmas lights were not mass-produced until 1902, when General Electric, a company founded by Edison in the 1880’s, brought the holiday lights to select consumers, and the lights were quite expensive and not available to the mass market until a few decades later.

While it’s been many years since crowds first flocked to Menlo Park, to view Edison’s electrical masterpiece, we are reminded each year of the innovation and beauty that was displayed on that cold, December night and how Edison bridged the gap between wonderment and reality.