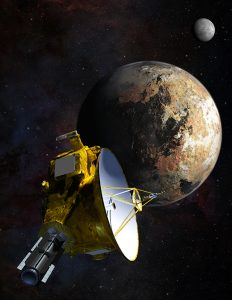 The Pluto flyby of 2015 put space exploration back in the headlines as the New Horizons spacecraft sent captivating images of the dwarf planet back to Earth. Pluto was the last planet in our solar system to be explored, which seems to be routine to us now in 2017. But the New Horizons spacecraft was an engineering marvel that travelled over 3 billion miles since 2006 and successfully completed all of its primary missions. First, New Horizons mapped the surface of Pluto and its main moon, Charon. Second, it characterized the geology and composition of these bodies; and third, it analyzed their atmosphere. The astonishing images of Pluto generated more media coverage than NASA had ever had before, demonstrating that most Americans are supportive of space exploration and value its contributions to both science and national pride.

Edison Awards honored NASA with a Gold Seal award in 2016 for the New Horizons spacecraft and interviewed Dr. Alan Stern at the annual awards event. The nomination essays and interview are now both captured in an executive summary, detailing the engineering efficiencies and cost-saving strategies of the mission. The Executive Summary is available for download at https://www.edisonawards.com/news/executive-summary/

Since 1987, The Edison Awards™ have recognized and honored some of the most innovative new products, services and business leaders in the world. The organization is named after Thomas Alva Edison (1847-1931) whose extraordinary new product and market development methods garnered him 1,093 U.S. patents and made him a household name across the world. The Edison Awards symbolize the persistence and excellence personified by Edison, while strengthening the human drive for innovation, creativity and ingenuity. View all posts by Edison Awards