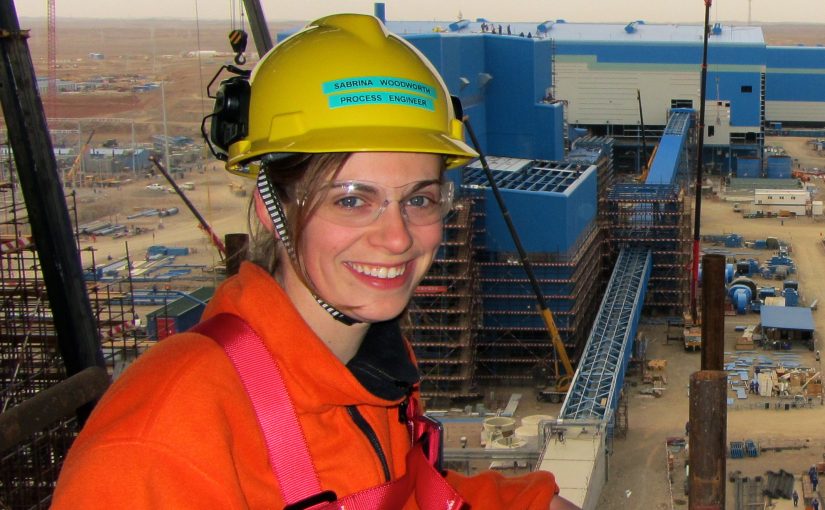 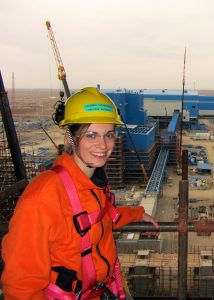 Sabrina Woodworth is a Project Manager with Fluor Corporation in the Energy & Chemicals business line and is currently responsible for managing a sustaining capital portfolio of seven projects on the Enbridge Alliance.

Sabrina graduated from the University of British Columbia in 2006 with a degree in Metallurgical Engineering. She was a Process Engineer for eight years before she entered Business Development as a Sales Coordinator (a sought-after internal position within the company’s Business Development group) in July 2014 and then moved into Project Management in January 2016.

The Edison Awards recently spoke with Woodworth about her interest in science, what its like to be a female engineer and some of her career highlights. Here’s what she had to say: (edited for brevity and clarity)

My interest in science started at the age of four. It’s interesting, as I wasn’t fully aware of this interest until I got into high school. Looking back, it was very apparent that I had a general interest in math and science at a very young age. My brother is five years older than me and one boring Saturday afternoon when I was four, he decided to teach me my multiplication and division tables; after that, I was hooked and math was my favorite subject through elementary and high school. This was even more amplified when I was diagnosed with severe dyslexia at the age of six. I couldn’t read or write until I was nearly nine years old. During this time, math was my shelter from feeling stupid. No matter how hard the problem was, I could solve it. I had some strong teachers as a young student who would read me math problems and allow me to solve them verbally till my reading and writing caught up.

Since I preferred Math, I decided to enter Engineering at University instead of science, as there was more math in Engineering. On my first day of class at the University of British Columbia, it was very apparent that being female in engineering put you in a minority. Regardless of this, it did not discourage me; I wanted to be around people who shared similar interests as me and this was not dependent on them being a woman.

My first year in Engineering was difficult. It was far more demanding than high school. I had seven subjects and all of them required a great deal of effort. If it wasn’t for the help of my peers, that year would have been far more difficult. My first year was certainly challenging, and I didn’t feel I got a lot of support from my professors, but my peers and team members were there for me and got me through this challenging time. Once I entered my second year and chose my discipline of metallurgy, my professors became far more supportive. One professor, in particular, gave me a lot of his time and tutored me, and if it wasn’t for his help, I’m not sure I would have gotten through Thermodynamics (till this day that was the hardest course I have ever had to take).

Engineering can be so many things that it is nearly impossible to define; so yes, I believe there can be misconceptions to the field of engineering. It ranges over countless disciplines such as mechanical, chemical, electrical, computer, aerospace, mining etc. and numerous industries.

I work for an Engineering, Procurement, Fabrication, and Construction (EPFC) company, which is just one possibility. With my degree, I could have entered several different industries, some of which may not even be linked to engineering. An Engineering Degree can get you in the door to many companies that are not linked to engineering or technology (in areas such as business, finance, and accounting). Since the EPFC industry is highly dependent on commodity prices, I have learned a great deal about the commodities markets and stocks. Several colleagues over the years have left the engineering field and now work for large financial institutions, these are just a few of the possibilities you can have moving into a STEM field; the opportunities are truly endless.

What are some of your career highlights?

Five years into my career as a Process Engineer, I had the opportunity to spend 16 months living and working in an International Mining Camp in Mongolia. I was given the opportunity to assist in the construction of a copper concentrator and stay through start-up of the plant. When I accepted this opportunity, my ultimate goal was to learn as much as I could about Process Engineering and the Mining Industry. What I received from the assignment far exceeded my expectations. At the job site, my knowledge and skills increased as I rotated through four positions that covered several disciplines.

As I got to Mongolia, the project was in the middle of construction, concrete was just about to get placed. I was hired into the Pre- Commissioning group. I tried to keep a low profile at site but found this impossible to do. I was the only Caucasian female engineer at site and stuck out like a ketchup stain on a white shirt. When I walked around site every afternoon, people would literally stop and ask to have a photo with me; with this, I realized female engineers in the field were just not that common in the Gobi Desert project site.

Since my role was in the pre-commissioning team and not in construction, I found myself at times a little bored with not enough on my plate. I went and asked the Project Director if he needed help with anything and this request was not ignored. I was given the responsibility of overseeing the engineering, procurement, and construction of the concentrator bagging plant, which was just added to our scope by our Client. This new positon consumed the majority of my time.

As my responsibilities on the Concentrate Bagging Plant began to reduce, the Pre-Commissioning group was ramping up. Because I was away from the group for six months overseeing the Bagging Plant, it was tough to get back into their day-to-day activities and discussions. It became very apparent that they were moving on with their work without me.

I asked numerous times to be given work and a system to turn over, but nothing came.  I hit a wall so to speak and wasn’t sure what to do with myself. I started doing walk downs on my own, seeing if I could help anyone with anything.  I started helping the completions group with walk downs in my spare time.  During one of our Plan of the Day meetings, it was mentioned that they needed someone to handle the startup and turnover of the Fire Water System. No one seemed to want to do it, and so I volunteered.

I’ve been told by colleagues to always be careful of what you ask for, and after this story, it will prove the statement correct and an example of Murphy’s Law at its finest. For what should have been an easy system to turn over, just three pumps and a few manual valves, it quickly became a great challenge, as all 3 pumps were either damaged during shipment or inoperable. At the same time of having the fire water system down, the Mongolian Government Safety Representative was coming to site to oversee and check that we had an operating Fire Water System during Pre-Commissioning. If the official was not content with our progress, he had the authority to shut down the entire site. All of the sudden, the Fire Water System became top priority and got the attention of the Deputy Project Director on the Client side.

With some innovative thinking and teamwork, we were able to get the Fire Water System up and running. I never thought that getting the Fire Water System operating would be a great success but it ended up being a game changer during my career at site. I was approached by a Senior Mechanical Superintendent who observed how I solved this issue and was asked to join his turn over team.  I said “yes” to his offer and with that answer, I got an amazing mentor for the next several months. By showing discipline, following through on my word and seeing the job through until you get the desired results, I was able to gain the respect of my colleagues and some amazing opportunities were presented to me. I was promoted to be an Area Commissioning Lead of the Tailings and Regrind Areas. In this position, I got to lead, schedule and train operators. We conducted full system turnovers to the Client. By the time I left site and returned home, I felt and acted as an experienced and tested engineer.